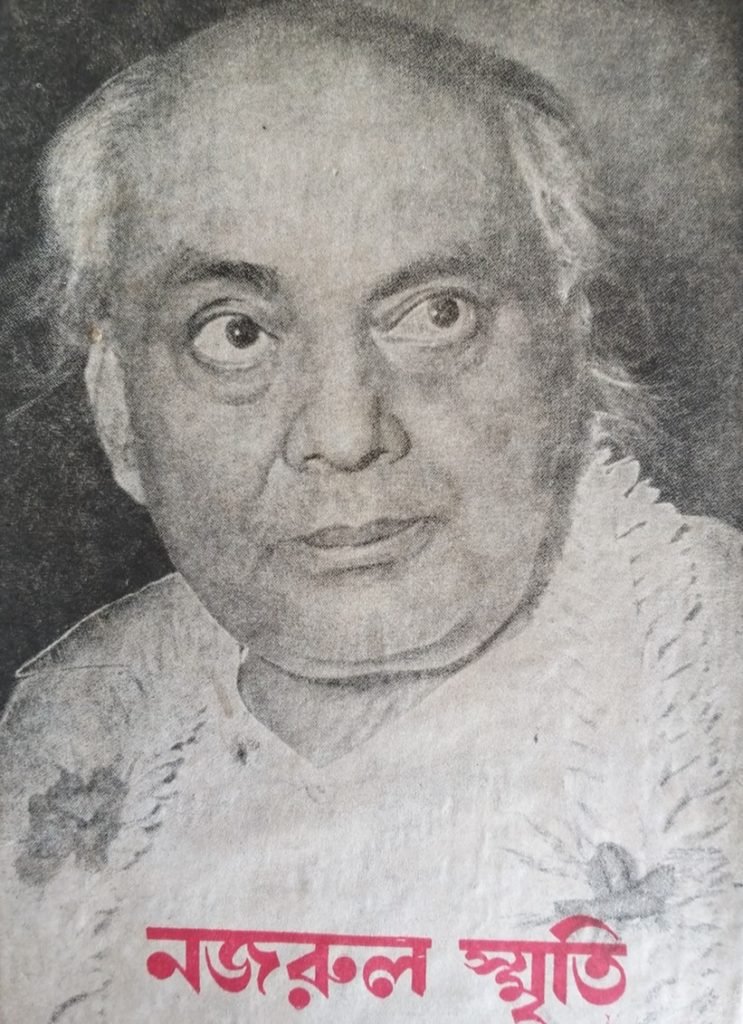 We had gone to visit my aunt one evening, and there was Meshomoshai, my uncle, sitting in his room and making a pencil sketch of a bald old man, with the most strikingly large pair of eyes which seemed to be looking straight at me…or right through me…! I don’t know why I have neither forgotten those eyes, nor the portrait. I did not know then who this person was. A few days later, we were all seated at the auditorium of the Calcutta University Institute and lo behold! There he was! The old man from the portrait with two shriveled up old ladies by his side, were sitting on the stage with Meshomoshai and some other dignitaries. The said portrait was displayed on an easel on one side of the stage. Little did I know the significance of that evening, otherwise I would have taken notes and kept them archived. I was too young to understand that I was watching legends. It was Kazi Nazrul Islam, and that was his last public appearance! The two ladies were the legendary singer-actresses of yesteryear – Angurbala Devi and Indubala Devi!

The two ladies sang, the other dignitaries gave speeches, but the old man did not utter a word. He just sat there, clad in all-white, a garland around his neck, looking vacant. I came to know much later that he had a rare, incurable neurodegenerative disease, called the Pick’s disease. He had lost his voice and memory due to this. He was only 43 years old, when he was afflicted by this condition. The voice that cost him his freedom many a times for rebelling against the British Raj, was stopped short by the hands of the God whom he once served.

Born on 25th May 1899 in a Bengali Muslim family in Churulia village, Asansol, of Bengal Presidency of British India, Nazrul had to step into his father, Kazi Faqeer Ahmed’s shoes as the Imam of a mosque at the young age of 10, due to the latter’s death. He had the responsibility of taking care of his mother, Zahida Khatun, and his three siblings. He studied at the mosque and Madrasa, and also assisted the teachers there. Later, he worked as the Muezzin at the mosque. He was nicknamed ‘দুখু মিঞা’ (Dukhu Miyan) because of his ordeals.

He was attracted to folk theatre and joined a traveling troupe called ‘লেটোর দল‘ (Letor Dol). He travelled with them, learning through his experiences and writing songs and poems for the plays. He also studied Sanskrit and Bengali Literature, as well as Hindu scriptures. His compositions include poems, songs and plays of the patriotic, romantic, and religious genres. Speaking of religious songs and poems, it is interesting to know that Nazrul not only wrote on Islamic topics but also wrote Hindu devotional songs. Ghazals were introduced to Bengali music by him. He wrote for the masses. 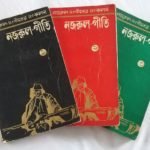 He was a rebel. Through his poetry he roared out his protest against the British Raj. He had joined the British Indian army during the First World War and left it when the Bengal Regiment was disbanded in 1920. He settled in Calcutta. He had, by that time, read the works of the great Muslim poets, as well as Bengal litterateurs like Rabindranath Tagore and Sarat Chandra Chattopadhyay. After leaving the army, he started writing. ‘বিদ্রোহী ‘ (Bidrohi), the Rebel, is one of his most famous poems. ‘আনন্দময়ীর আগমনে ‘ (Anandamoyeer Agamone) was a political poem for which he was arrested and charged for sedition. While in prison, he wrote ‘রাজবন্দীর জবানবন্দী ‘ (Rajbondir Jabanbondi) – the Deposition of a Political Prisoner. Many of his works were banned by the British Government.

He was a proficient musician, actor, writer and adventurer. He had even worked as a music director in movies. He worked as a lyricist, composer and music director for the His Master’s Voice Gramophone Company. He was recruited by the Indian Broadcasting Company.

He condemned meaningless orthodoxy. He even had the guts to condemn the Khilafat Movement. He wrote what he felt was right and did not care about what people said. In those days, when such marriages were unthought of, he married a Hindu lady, Pramila Devi. Both of them defied the criticism of their respective religious leaders. He was like the Comet, ‘ধূমকেতু ‘ (Dhumketu) – his bi-weekly magazine. It’s amazing how he could fit such multifarious activities within his extremely short span of active life. 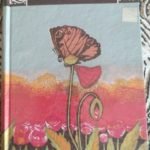 Since 1942, the dreaded disease started taking away his power of speech. His behaviour became erratic. In 1952, he was sent to Vienna for treatment, where his disease was diagnosed. His wife died in 1962. His condition deteriorated. In 1972, Bangladesh Government took him to Dhaka, and gave him citizenship. Kazi Nazrul Islam passed away on 29th August 1976, in Dhaka, leaving behind a rich legacy of Nazrulgeeti for his disciples and admirers.

On the occasion of Kazi Nazrul Islam’s birth anniversary