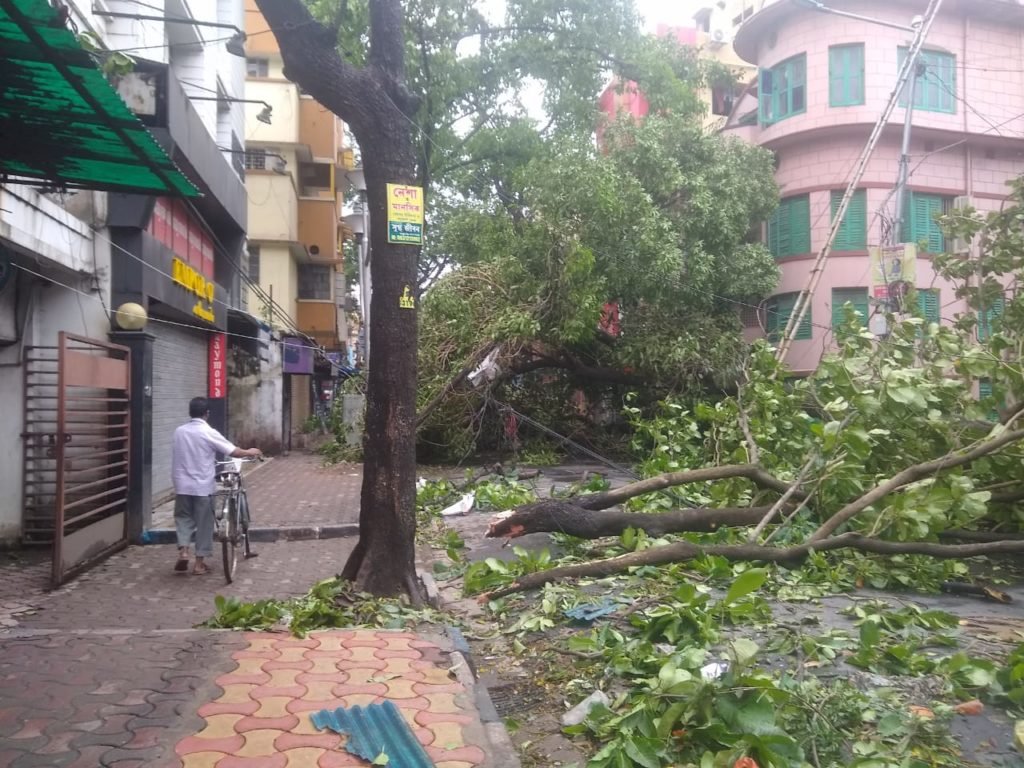 Every day, the newspapers and news channels are full of news about disasters. Both natural and man-made. But that’s all they are – news. They do not affect us directly…until they do.

Through the news, I’ve witnessed the 1999 super cyclone in Odisha, the hijacking of the Indian Airlines flight 814 in 1999, the Gujarat earthquake in 2001, the terrorist attack on the Parliament in 2001, the Tsunami in 2004, and the 26/11 Mumbai attacks in 2008. These are just events in India. However, while these were terrifying and devastating, they did not affect my private space because like everyone, I thought “It can’t happen to me!”

My first encounter with terror – real terror – was in November 2007. I was in the final year of school. On 16th November, while we were in our last class of the day, we heard that there was some trouble outside the gates. At 1:30 PM, when school got over, we could not leave because our bus was stuck due to the said trouble. So, I went and got my brother, Shayak, from his school to mine, and waited for the ‘trouble’ to end. During the next few hours, those who could leave, left; while a handful of us stayed in school till 5 PM before we could leave. Later, we had learnt that there had been some sort of demonstration regarding the writer Taslima Nasreen because of which A.J.C. Bose Road had been blocked off. Till date, I am not sure what had triggered it off. Anyway, that was not scary. That was non-violent.

Six days later, on 22nd November,  there was trouble brewing outside the school gates again. This time, however, it was serious. Protestors were apparently throwing bricks, even at the school gate. Again, I went to get my brother, a Class V student at that time. This time, I used the gates connecting our schools through the field and St. James’ Church. The moment he saw me, he ran to me; hugged me and cried, “Didi, I thought I’ll never see you again!” He was that scared. A few bricks had broken some windows of their class. After I brought him to my school, we went with a friend of mine to her house nearby. There, the news was on – and it was scary. Protestors were throwing bricks, burning down things, damaging vehicles – even those with school children in them; there was lathi charge and tear gas by the police. The RAF was deployed in several places in the city. It was about 6 PM when our mother could eventually come and get us. Thankfully, the rest of the year passed peacefully!

In 2009, there came cyclone Aila. Though it did not pass over Kolkata, the resulting storm was quite severe. In 2015 was the Nepal earthquake, which was felt all the way here. Again, though we felt the tremors and some buildings developed cracks, the destruction and devastation did not hit us hard.

2016 was a little different. In March 2016, there was a huge fire in the Zoology Department of Ballygunge Science College, where I am doing my Ph.D. Thankfully, since it happened after 5 pm, there were not many students around. There were no casualties but much of the department was damaged. We could smell the burnt wood for days.

You’d think that two riots in one’s life would be enough! But no! In 2016 again, Shayak had to return from his college in the middle of the semester, due to riots in Haryana.

Last year came cyclone Fani, which hurled itself at Odisha but left a line of wreckage even in West Bengal. There was a cyclone warning in Kolkata. Stuck at home, we could hear the strong winds whistling through the closed windows. Eerie!

We should have expected some weirdness this year when we heard that there is a one month hiatus between Mahalaya and the actual Durga Puja.

2020 has exceeded all sorts of expectations! The year started with the carried-over-from-2019 news about COVID-19 but that did not seem real till about mid-March, when everything started shutting down in India.

Shayak’s college was the first casualty in our family, when they closed down and he returned on 14th March. We wound up our work in our lab on 17th March, and went into home quarantine. Lockdown started on 23rd of March. For the last two months, we’ve honed our carom and our card skills, have experimented with several dishes, worked from home, and done regular household chores. We have left home only to go to shops to buy essentials, and in my case, to go to the lab once a week to feed and maintain a culture of Planaria that we research on. 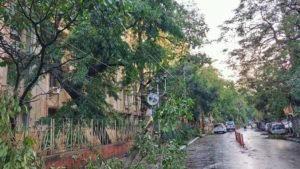 Even during the lockdown, came the news that cyclone Amphan was coming. Then it turned into a super cyclone and it was to hit West Bengal. On 20th May 2020, Amphan made its landfall near the Sunderbans in West Bengal. Though it had weakened from a super cyclone to an extremely severe cyclonic storm, it wreaked havoc everywhere. Talk about scary! What we went through before was not even in the ballpark of what we were feeling last evening!

The raging storm started at around 6 PM. Gathered intensity till about 7:30. With intermittent electricity in our flat, we spent the evening mopping up water that kept entering the rooms through the tiny gaps between the windows and the sills, and through the bolts! The trees outside the windows were swaying so much, it felt like they’ll break through the glass. The curtains, which we had drawn to prevent glass from scattering in case the windows broke, were billowing even with the windows closed! Water entering through the skylights in the stairwell and the roof created a torrential waterfall along the stairs. And the sound! The howling and whistling of the wind made the atmosphere perfect for a ghost movie – complete with the candles when the power was out! For over an hour, the four of us sat in our living room – sometimes going on inspections to check whether the towels we had placed on the window sills needed wringing; Ma doing Reiki to somehow pacify the storm; all the while, preparing Biryani for dinner! The photos and videos coming in were truly scary – trees being uprooted, transformers on the streets catching fire, water-logging inside homes. One of Shayak’s friends sent a video of her ground floor rooms in ankle-deep water. Even amidst this, they managed to keep their humour alive by sailing paper boats in their waterlogged homes!

Even after the storm passed, which we thought was the eye of the cyclone, we kept sitting. Waiting for the second wave to come!

In the morning, as we were getting news, photos and videos from all around about the damage that many people have faced – we felt lucky. What’s a little water inside the flat, a burst water pipe and intermittent electricity in comparison? 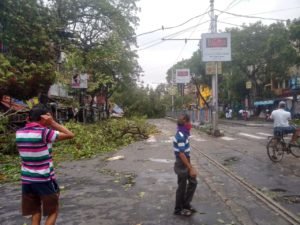 I wonder what else 2020 is waiting to throw at us! Aren’t a global pandemic and an extremely severe cyclonic storm – both of which leave us helpless and waiting – enough? At the rate this year is going, just 5 months in, I think Shayak may be right. We won’t be surprised if 2020 adds in an extra month after December – just to make us more miserable!

Department of Zoology, University of Calcutta

Meaning of Headline: So many colours or games I see in this world! In this life!