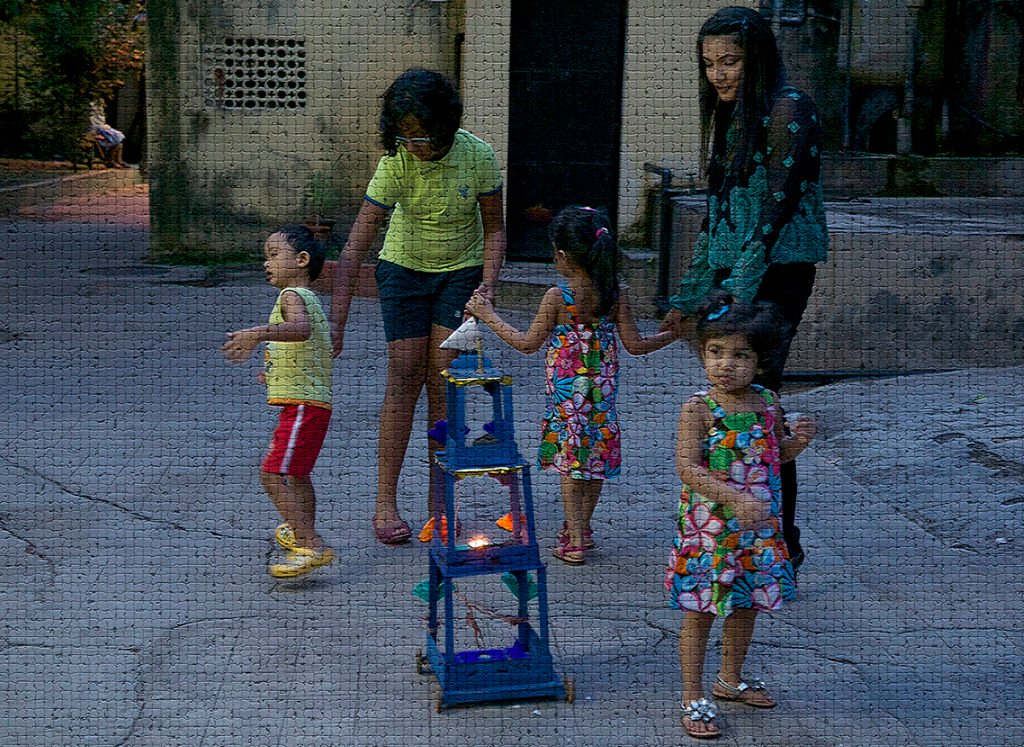 “Lakshman, taratari khete de!” (1) – was the chorus that was heard in our house almost every Ratha Yatra day, around 2 pm. We never had a holiday on Ratha Yatra. We would return from school, raring to start decorating our rath so that we could pull it to our mama-r bari (2), which was not too far from our home on Kartick Bose Street.

We had everything ready for decoration – tiny wooden idols of the gods – Lord Jagannath, Balaram and their sister Subhadra, streamers made of crepe paper, stencilled kite paper, flowers, leaves and little clay dolls to fill the other tiers of the rath. Our rath was a three tier one, not more than 3 feet tall with a wooden pennon (a triangular flag) on top. I have forgotten its original colour because over the years, it got totally covered with the coloured kite paper stencils, which we meticulously stuck to its wooden body. 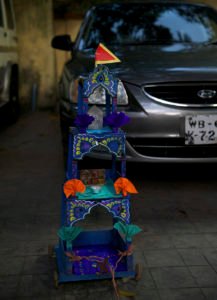 We would be ready by evening. Rath decorated, Ma would place the sweet offerings in front of the idols, sitting smugly on the middle tier with a lighted candle in front. My sister, brother and I would wait, bathed and dressed up, to take the Divine Trio to their Mashir Bari (3). The rituals were merely symbolic for us. We were more interested in going to either our aunt’s house or to our grandparents’ house. If we took the rath to OUR “mashir bari” and our Mashi’s daughter brought hers to our house, then we would miss meeting her. That surely wouldn’t do. So our mamar bari it was, where Ma and Mashimoni’s children took their raths to. And it was then Dida’s (4) job to tend to the deities for the next 7 days, after which we brought back the raths on the day of Ulta-rath.

So, we would be ready for the grand journey to our Mama-r Bari on Sitaram Ghosh Street. Our journeys were no less arduous than the actual pilgrimage for which millions throng the streets of Puri every year, just to touch the holy rope of Lord Jagannath’s chariot on the way to Gundicha House.

A very short distance, usually covered in 5 minutes (more so because we usually ran there) took almost half an hour on these auspicious days. As it is, the three tier chariot of ours had the tiniest set of wheels, which wobbled from day one. Its balance was not right and someone (usually Lakshman) had to hold on to the wooden flag post on top to prevent it from toppling over. To add to our sorrows, one of the wheels would come off every few minutes and the potholed roads didn’t help. Every time the wheels came off, the idols would fall flat on their faces. So, they had to be straightened and the candle lit again. By the time we reached Amherst Street, we would be tired of attaching the wheels for the umpteenth time. At that point, we would have to cross Amherst Street – the next difficult step in those journeys.

Two of us would pull the rope and one of us would bang on the “kansor” (5) with full power. Lakshman would then pick up the divine chariot by its flag post with one hand and grab my brother with the other, and walk across. The show-stopping entourage would cross the main road safely, with my sister and me running to catch up with them. Lord Jagannath and siblings would thus reach their destination on a flying chariot, with my siblings and me almost flying after Lakshman, who probably had the longest legs in the world. And after that, it would be unadulterated fun of cousins’ getting together while indulging in a grand Ratha Yatra feast consisting of mouth-watering telebhaja, papadbhaja and gujiya.

Now, when I think of Ratha Yatra, my memories don’t include fanatic worship of Lord Jagannath. Only the lame wooden chariot and loads of fun.