The taxi driver was excited to know that we were Indian tourists! He phoned his mother from the car to tell her that he had Indian passengers! She welcomed us, excitedly. That was something new to us. Indian tourists are not always liked in most countries. So, I was pleasantly surprised when I visited Russia during the FIFA World Cup in 2018. This is one country where Indians are still spontaneously welcomed by the common man. 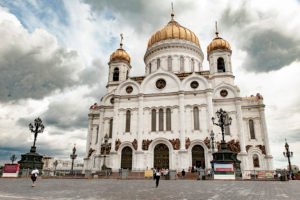 Cathedral of Christ the Saviour in Moscow, Russia

I had heard stories from my father about Raj Kapoor’s popularity in Soviet Russia during the Cold War period. Raj Kapoor’s films Sree 420 and Awaara captivated the minds of the Russian common man with his portrayal of a Chaplin-like hero and powerful on-screen chemistry with Nargis. Along with an ushanka (Russian fur hat), my father also brought back an EP record of ‘Mera joota hain Japani’ and ‘Awaara hoon’ sung by a Russian singer when he returned from his Moscow trip in the 1970s. We used to watch Films Division documentaries whenever we went to the cinema. They would show Jawaharlal Nehru, Indira Gandhi, Raj Kapoor in Russia, being given rapturous welcome. Although Lal Bahadur Shastri got a raw deal while in Russia. During the Cold War era, India was the only ally of Soviet Russia and cinema goers were exposed to either Russian propaganda movies or dazzling Indian films. They preferred watching the optimistic escapism of Hindi films. Yet, 29 years after the Cold War ended and India has redefined its political allegiance, it is not Raj Kapoor who reigns the Russian filmy minds. It is Mithun Chakraborty and his film Disco Dancer!

The taxi driver started playing songs from Disco Dancer on Youtube and raved about the movies starring Mithun and Sridevi. Another day, while we were walking towards a stadium, some football fans came alongside and started singing ‘Jimmy Jimmy’ with so much verve that I could not help laughing and joining in.

It was indeed a surprise for us! This is an actor who never got his due in snobbish Bollywood, yet has won and got nominated for best actor awards for all the serious films that he has acted in. Mithun has been remembered more for his mediocre films than the gems that showcased his unquestionable histrionics. He has never evaded paying income tax and is known to be the most benevolent star in the Indian film industry. He runs charitable hospitals and trusts, and silently works towards the improvement of the society.

Mithun won the 1976 National Film Award for Best Actor for his debut classic Mrigayaa directed by Mrinal Sen. This film was so impactful that I have watched it only once when Doordarshan telecast it in the late 80s and remember almost every scene! How Mrinal Sen zeroed in on this ex-Naxalite and a graduate from the Film and Television Institute, Pune is a story by itself. The legendary director selected an A-class actor with star qualities. He wanted a “rugged He-man” to play the part of Ghinua Soren. There was hardly any actor who could fit the role. There is still no other actor who can replicate Mithun’s role. Maybe Irfan Khan could have! 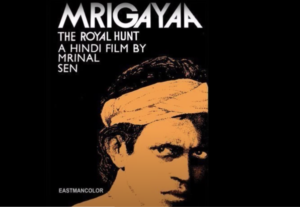 Mithun entered the Hindi movie scene with intense eyes, a disarming smile and a dark chiseled body that had 5-packs more than most of the actors of that period (way before the Khans defined 6-packs). Though he had an urban background, it did not deter him from portraying a rustic, romantic youth whose gait had a feline agility that effortlessly combined jungle eroticism with innocence and rebelliousness. 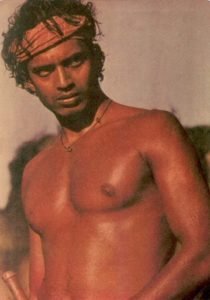 Mithun went on to win the National Film Award (1992) for Buddhadeb Dasgupta’s Tahader Katha and Best Supporting Actor for Swami Vivekananda where he played the role of Sri Sri Ramkrishna Parahamsa. He was nominated for Best Actor for Titli (2002) and Kaalpurush (2008). He won the Filmfare Award for Best Supporting Actor (1991) for Agneepath and Best Villain for Jallad (1996). He acted with aplomb in Shaukeen, Hum Paanch, Guru and in Gautam Ghose’s Gudia that was screened at the 1997 Cannes Film Festival. His Bengali films Kalankini Kankabati, Troyee, Shukno Lonka and Nobel Chor are worth mentioning.

I remember watching a little known commercial film called Jeene ki Arzoo where he was given snake venom by his snake charmer father to make him immune to snake bites, following which he developed snake-like characteristics. I would not have remembered the movie but for his eyes that portrayed love, hurt and anger, so intensely. However, Mithun is more famous for his distinctive dance moves. I am in the habit of visiting single screen movie halls wherever I go, to observe people. Once when we had gone to Bolpur in the 90s, Mithun’s Waqt ki Awaz with Sridevi, was being screened. All that I remember of the movie is Mithun and Sridevi dancing.

I am not writing this because of my Bengali connection. I would not have appreciated Mithun if he was not a good actor and a genuine human being. My husband often gets into debates where invariably people compare Mithun with Amitabh Bachchan. Agneepath proved who was the better actor. Sadly, he has been typecast in Hindi films but has more memorable films in regional languages. If you want to see a suave Mithun, please watch Rituparna Ghosh’s Titli.

The Russians may have watched Mithun’s dance moves more but Mrigayaa, an art film, was nominated for the Golden Prize at the 10th Moscow International Film Festival in 1977. As usual, foreigners understood his potential more than his own country. The Russians also have a Mithun Fan Club that celebrates his birthday, religiously. A few years back, an Indian diplomat based in Moscow, was approached by an elderly Russian lady to deliver a birthday cake to Mithun, in India – From Russia with love to Mithun Chakraborty.