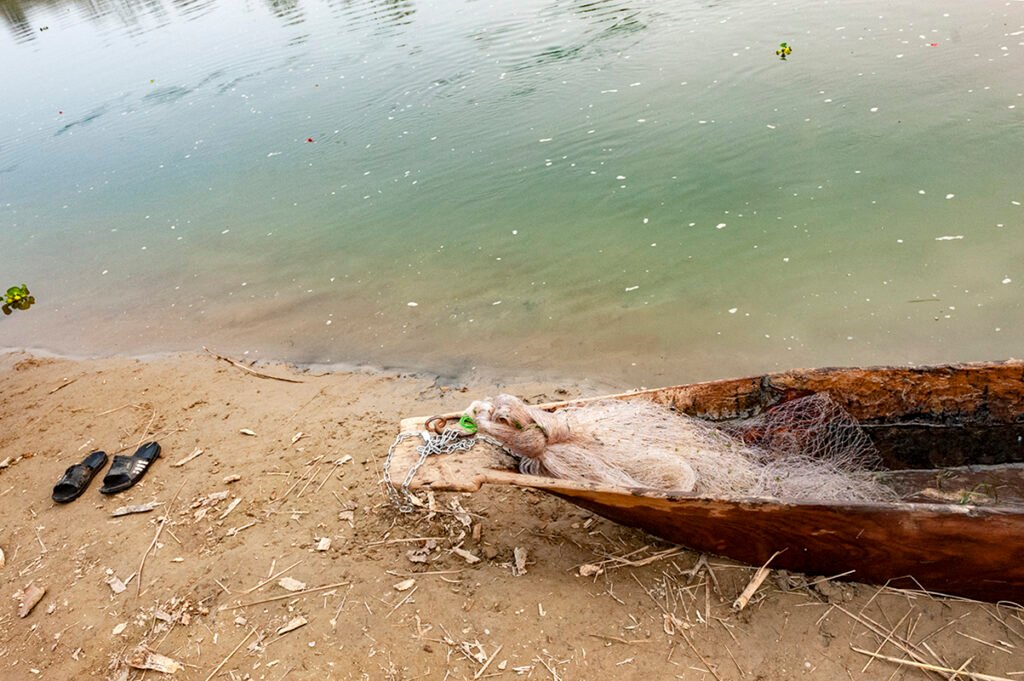 Fishing among Crocodiles and Rhinos

Dusk settled stealthily on the banks of the East Rapti River, sandwiched between Nepal’s Chitwan National Park (CNP) and the picturesque tourist village of Sauraha. A group of men loitered around the thatched mud hut of Rishiram Bote, who belongs to the ethnic tribe of Bote of Terai. The wives and daughters of Rishi’s family went about their household chores of feeding their pet dogs, hens and goats, sweeping mud floors and washing utensils at the tube well. The boys played football. In between the loitering, playing and doing chores, everyone kept looking towards the river with expectant eyes. 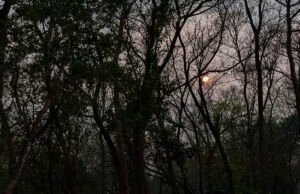 Around 5:00 PM, two small fishing boats, made of shimul wood, pulled in at the bank. Unlike the longer canoes that ferry tourists and forest department personnel, these boats could accommodate only two people. The women and children ran towards them with plastic basins and sharp machetes. Rishiram and three fishermen jumped off the boats with their small handheld fishing nets that were full of fishes like bighead carps, silver carps, rohu, naini, mrigal, silver fish, catfish and eels. Around 120 kinds of fish can be found in the cool waters of the Rapti. The fish weigh around 10 kg sometimes. These licensed fishermen are not allowed to use the longer nets to prevent crocodiles from getting entangled in them. So, they have to be satisfied with whatever they can haul in their smaller nets. 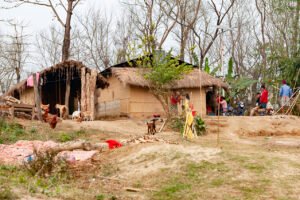 Rishiram’s hut with customers waiting for the fishermen to return

The Bote women unloaded the fish; weighed and sold them to the men who were loitering around. They were regular customers who wait for fresh fish to arrive. Most of them were hoteliers who resell the fish at triple the cost price. Within minutes, the entire lot was sold off. It was a good day. 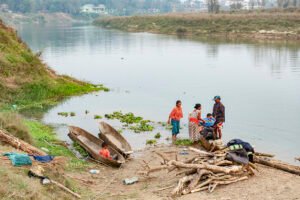 All the fish do not always sell. The Botes dry the unsold fish and consume it themselves. The quantity is also not the same every day. They leave at 6 or 7 AM daily. In winters, it becomes difficult to wake up so early. Hence, the quantity is less. Thick fog, enveloping wintry mornings, has its own challenges. They are not allowed to fish at night. So, survival is difficult. 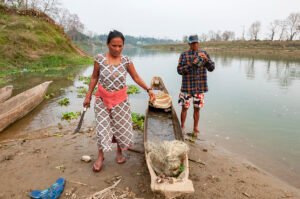 The dangers of fishing in crocodile-infested waters and a dense forest full of wild animals, are plenty. 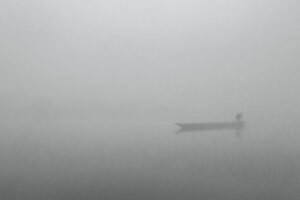 Dense fog on a winter dawn on East Rapti River

Often, ghariyals get entangled in the nets. The reptiles have to be disentangled carefully, following the handling instructions taught by the forest warden; and then taken to the ghariyal breeding farm, inside the forest reserve. Losing friends and family to the crocodiles is common. A few months ago, Rishi’s friend’s body was found around 50 km away from where he was last seen. During monsoons, the river swells up and the crocodiles come right up to the huts. They are shooed away with sticks, sometimes unsuccessfully.

The misty winters and tall, thick phanta grass have rhinoceroses and elephants lurking in them. The fishermen and rhinos, frequently, cross paths. On one such cold morning, Rishi’s uncle had gone into the forest with his nets, got rammed and killed by a rhino. Encountering tigers and elephants can be a risky affair. Especially if it happens to be Ronaldo, a rogue elephant who keeps himself entertained by entering villages and killing inhabitants every year. Villagers usually ward off the wild elephants that come in search of food, with electrified barbed fences. However, the intelligence quotient of elephants is legendary. They observe when the power goes off; listen to the sounds and vibrations to understand that the wires are not functioning. The villagers then resort to lighting fires to keep the animals out. 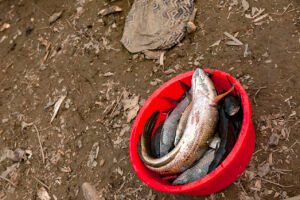 Catch of the day

The main livelihood of the Botes is fishing, paddling boats, gold-panning, collecting wood, elephant grass and edible ferns from the forest. However, since the CNP was established, fishing activities have been regulated with strict guidelines. So, some of them grow crops. They also sell chicken, eggs and elephant grass. They eat dal, rice, fish, mutton, chicken, buffalo meat and homegrown vegetables. Their solar-powered houses are made of mud and cow dung, and the roofs are made from elephant grass, which have to be rethatched annually. 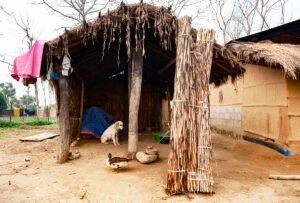 Rishiram and his brothers Parshuram, Dipak and Pardeep are the last few members of the Bote community in Sauraha. There are a few more Botes living down the river. Chitwan is, however, dominated by the more known Tharu community who have cleverly showcased their culture to attract tourists. The Botes are culturally and economically backward and different from the Tharus. The Bote language, dress, dances and songs are indigenous. The Bote language does not have a script.

There are two possible origins of the name ‘Bote’. Before they began making boats, these people would lay tree trunks or branches athwart a river to cross over. ‘Bot’, in Bote, means a tree. It could be that the Nepali speakers, therefore, started identifying these people as Botes. The other possibility might be that since these poor people did not own land or houses, took shelter under trees on the waterfront and thereby came to be known as Botes. A Bote’s existence revolves around the river. 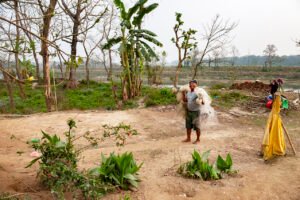 The smiling Parshuram returning after a fishing trip

Many members of the community have moved on from Sauraha, in search of greener pastures. The traditional livelihood methods are gradually being replaced by agriculture and non-agriculture-based activities that generate better income. CNP has also given auto-rickshaws under an installment scheme as an alternative to fishing. Rishi’s family has stayed on and continued fishing. They have been living here for more than 35 years. 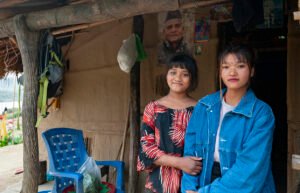 Rishi could not continue his studies as he had to become the provider of the family from a young age. He encourages the children to pursue their dreams. His four children and Parshuram’s two sons want to continue their studies though they are yet unsure of their professional goals. Their school timings do not allow them to go fishing with their fathers, hence the interest in fishing has flagged. The girls go to school where they learn Nepali, English and Mathematics. They also help in the housework. They speak a smattering of Hindi, thanks to the popular Hindi movies. 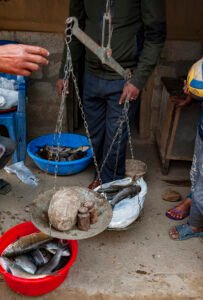 The adversities and poverty, however, have not been able to cut through their filial bonding. The Botes work together, smilingly and with pride. Hopefully literacy and sustainable livelihood progammes will uplift their socio-economic status and simultaneously, preserve their traditions and culture along with their smiles.

Best time to go for better weather: October to March

Best to time to see animals when they come to waterholes: April-May