To Climb the Highest Mountains 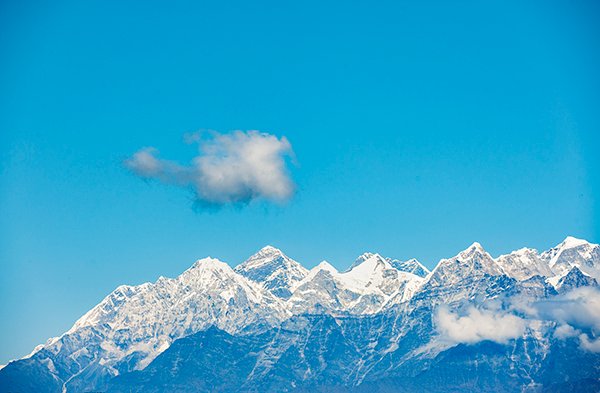 The warm smile on Kandu Sherpa’s face belies the hardships she has experienced to become a guide and help trekkers walk the challenging Himalayan trails. Like her smile, her petite frame gives no inkling to her rock-solid mental and physical strength. She can command more than 10 male porters, set up tents within minutes, carry heavy loads of 40-50 kg (including children) while negotiating sharp ascents and descents for 5-6 hours at a stretch. She is one of the 700, or so, female guides in Nepal and one of the handful who traverse the Everest region. 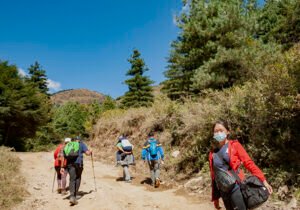 There are more female guides on the Annapurna Circuit Trek or Annapurna Base Camp. The Three Sisters Adventure Trekking company, run by women, has only female guides and porters. They allow maximum 20 kg luggage and 1 porter per trekker. Other companies usually allot a porter for every 2 guests.

About 11 years ago when she completed her SSC exams, Kandu lost her father to alcoholism. He was a Sherpa and guide for the Everest Base Camp (EBC) and Thorong La Pass treks. She dreamed to be a guide, too. Her father didn’t permit her as she was a girl. After his death, she had to support her mother to look after her five younger siblings. Her mother ran a small tea house in Kathmandu. Kandu shudders to recollect those days of grim existence. Till 2014, she worked as a helper, cleaner and receptionist at a guest house. Her job needed her to work 7 days a week. Soon, she tired of the mundaneness of her position. She felt caged. She wanted to fly, rather climb. She wanted to be in Nature, with Nature. 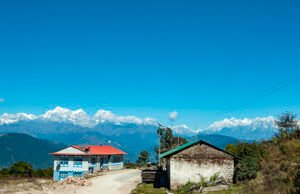 The girl’s heartfelt prayers were answered. In 2014, Jwalant Gurung’s Crystal Mountain Treks needed an extra assistant female guide to accompany an American group. She applied for the job and went on the trek with two other female guides. Her hard work impressed the leader of the trekking group, who recommended Kandu’s efforts to Jwalant. She could now free herself from her cage and give shape to her dream of climbing some of the highest mountains.

Kandu officially joined Crystal Mountain Treks in January 2015. Along with her colleagues, she was trained in Spoken English and office work. Now she is adept at speaking in Hindi and English. Joining at a trainee level, her first journey was the Annapurna Skyline Trek (Ghorepani Trek) through Dhampus, Landrung, Ghandrung, Jhinu, Tadapani, Ghorepani, till the Poon Hill, Ulleri. At that time, she didn’t know the roads. Today, she is the main guide who also leads all-female groups with ease. 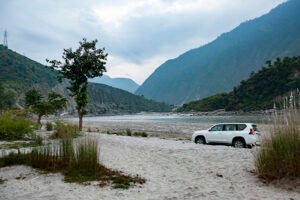 Camping near waterbodies is a must

In the beginning, flouting societal norms to become a female guide wasn’t easy. Simultaneously, a young unmarried girl spending days and nights, with various known and unknown people, garnered sharp social criticism. Kandu remained steadfast with a clear conscience as she felt she was following her heart, earning a decent living, and not harming others. Life is easier now. She supports her brothers’ education and pays for their rented house in Kathmandu. Earning is seasonal (February to April-May, September to November) and depends on the size of the trekking groups. Survival was a challenge during the pandemic. Kandu scraped together some money by making and selling souvenirs like mobile toys and bracelets. Before Covid-19, she would go on back-to-back treks; sometimes 5 to 6 treks in a season or longer treks of 14 to 40 days. Annapurna Skyline Treks are of 3 to 7 days. She did miss the busy and adventurous trekking days replete with valuable experience. 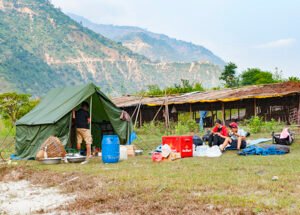 Resting and sharing meals at camp

Kandu’s treks with female guides and female porters are easier than the ones with male guides and porters, who go to EBC. Often, they must sleep in the same area and some men aren’t sensitive about not using obscenities or teasing her. She usually puts on her earphones and shuts them off. Conversely, many male porters stand up for her, too. However, she feels that the Everest region is safer as the people are literate and used to tourists and trekkers. For her, the wild animals and the rugged terrain are not dangerous. In all her trekking years, she has never encountered any dangerous animals. She has seen leopards, black bears, blue sheep and beautiful Himalayan birds. Animals attack only when they feel threatened. Men attack for sadistic pleasure. 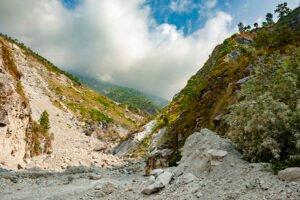 Kandu had some weird incidents on her trek to the rustic Dolpo region in 2019. As usual, they arrived at their destination in the evening and had to locate waterbodies and collect firewood. She went to collect firewood in the deep. Two strangers had gone there to gather yarchagumba. Finding her alone, they tried to molest her. She threw the firewood and ran for her life. Never has she felt equally terrified and threatened in her life. But that was a one-off incident.

There have been amusing experiences, too. Once, a poor Nepali couple arrived at the camp. Kandu and her team offered them tea and food but then they refused to leave. They wanted to sleep in the guests’ tent! When she managed to discourage them, they wanted to sleep in her tent. So, they slept in her tent while she curled up on one side, giving them her blanket and sleeping bag. Luckily, they left the next morning. 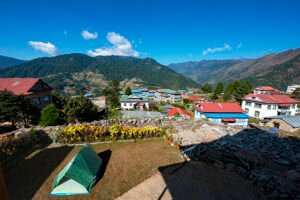 Once during peak season, Kandu had just returned to Namche Bazaar from EBC. The hotel rooms were full. Late in the evening, an Israeli came to their hotel and asked for accommodation. Kandu had been allotted a small room. Being soft-hearted, she offered him her room. He jumped at the offer. She slept in the dining hall. Next morning, he wanted to sell a bottle of shampoo to the owner in return of the room charges, a cup of tea and earn some extra money. He had gone on the EBC trek (minimum cost USD 1,500/-) yet didn’t have money to pay for a room and a cup of tea! That, too, on his second day of trekking! He also complained about the quality of the room. Kandu offered to buy him a cup of black tea only if he would return to Kathmandu from there. If he had continued towards EBC, there would have been no ‘Kind Kandu’ to bail him out. 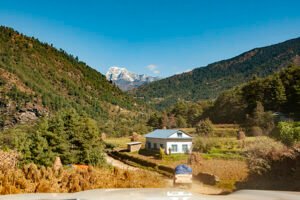 Kandu handles emergency situations as calmly as she extends her kindness to people. Often, tourists have accidents or get afflicted by altitude sickness and need to be airlifted. She analyses the symptoms; gives first aid relief; use satellite phones to contact base to arrange for rescue. This process is especially difficult in remote areas. The EBC and ABC are well-equipped for rescue operations. So, during peak season and in remote areas, she must hold fort, sometimes for hours or even a day. 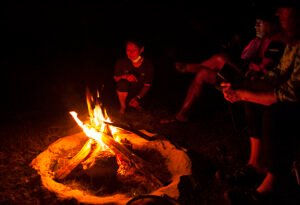 Kandu telling her story near the campfire

Kandu did hold fort at home when many people lost their jobs during the pandemic. She’s glad she still had hers. Generally, for guides and porters, no trek is equivalent to no income. Covid had lowered her income but it couldn’t lessen her ambition to climb the summits. 2021 was slightly better than 2020 with the world see-sawing between opening and locking down. If 2022 gives her the chance, she is determined to climb higher than her father, who went till EBC but not the world’s most coveted peak.